Posted on April 8, 2014January 26, 2021 by WCRC
The members of the Peace by Piece Sewing Circle have graciously made this wonderful 30th Anniversary quilt for us to give away this spring.

The proceeds of this drawing will go towards replacing the carpet in the Magnolia dining room. Tickets will be sold starting April 6 at Association Day through WCRA Serve and Play on May 31 when the drawing is held. You do not need to be present to win. Tickets are $100 each. 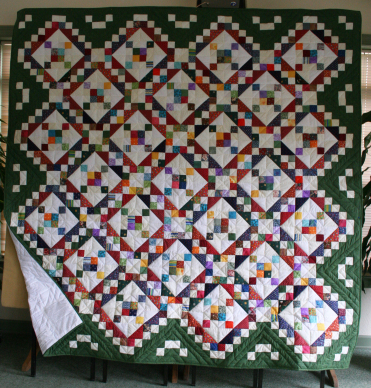 A note from the designer:

When asked to make a quilt for the 30th anniversary of WCRC, the members of the Peace by Piece Sewing Circle of Williamsburg Mennonite Church readily agreed. I was asked to design the quilt. There are hundreds of quilt blocks and I asked the Lord for direction and it was quite clear that the block would be Jacob’s Ladder. I looked up the story in the Bible and saw that the block referenced a vision Jacob had of angels ascending and descending a ladder from heaven to earth. WCRC began with a vision to build a place for people to retreat and commune with God and be open to Him to speak to people. Using my computer, I designed the quilt using the Jacob’s Ladder block. 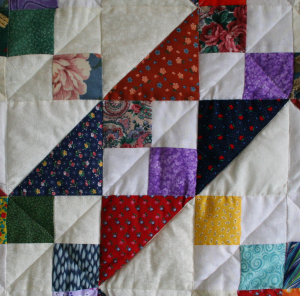 Three of us worked to make the blocks and as we joined them together secondary designs appeared. One was a path of light colored squares from the steps in the Jacob Ladder block that formed pathways around and through the quilt reminding us of the many hiking trails at WCRC. Because they are all light colored squares they remind us to seek the “Light” on our journeys. When the blocks came together, a light square set like a diamond appeared and they are filled with many different colored small squares reminding us of the many different groups of people that come to the retreat center to be surrounded by the Light of God.

When gathering fabrics for the quilt, I found a piece with eagles on it and thought about the eagles that are sometimes seen flying over the retreat center and there were 4 that would fit nicely on the triangle pieces in the quilt and one was added near each corner. This led me to look up the story in the Bible about being raised on eagle wings. Isaiah 40:27 begins with a reference to Jacob and continues on to explain how even the young get weary and stumble and fall but those who hope in the Lord shall be renewed and soar on wings like eagles. WCRC is truly a place for young and old alike who are weary to come and be renewed in strength by communing with God. These verses sealed my thoughts on why the Jacob’s Ladder was God’s choice for this quilt.