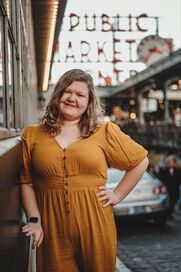 Kai Schwegal is the Foodservice Manager here at WCRC. She has been in this role for over a month now. She oversees all ordering, scheduling, and meal planning for the kitchen and its staff. Though Kai has only been in this position for a little while, she has been a part of WCRC staff for two and a half years.

“[On my] first day working in the kitchen I started [with] 90 people, we were serving, so that was insane, but I have previous culinary knowledge so it was okay. I started off working as an assistant cook for WCRC then moved up to a MOD, manager on duty. That was like a month time span that I went from assistant cook to [head] cook. This past summer I was camp photographer, that was a fun time! It was nice to take a step from the kitchen…  but end of camp I was like okay, I’m ready to get back into the kitchen and I was a MOD again. And then I got offered this position,” Kai said.
Kai did not always want to go into culinary work and considered a couple different careers in high school. Being a veterinarian was one of her primary plans and she even toured Virginia Tech’s veterinary school, but realized it wasn’t for her.

“My entire like my family was like, “You need to go into culinary!” And I was like, “No, no, no, this is not what I want. I love cooking at home, but I don’t want to have that as my job.” She laughed at the memory. Now she loves working in the kitchen and recognizes her family was right.

When asked what her favorite things about WCRC are, Kai said she had many but noted two in particular.  “I like how peaceful the grounds are even when there’s summer camp going on. There’s like the crazy summer camp section, but it still feels pretty peaceful. And I love the staff! We’re a fun group of people sometimes,” she said with a smile.

“The work environment is really nice too, we’re all pretty much like minded people working under one roof, so what more could you ask for.” Kai added. She shared one of her favorite memories from last summer. “Support staff and leadership team and every[one] sits at the staff table and my favorite thing is eating all together and just watching everybody and talking. And Josh [Brown] is just, you know, being Josh on the other side of the table.” She described how the camp staff is like a family and sharing these times around the table were some of the happiest moments of the summer.

Another one of her favorite memories at WCRC is getting rebaptized- in the pool! She explained how through working at camp and through her friendship with staff members like Ginger South (Support Staff Coordinator) and Josh (Program Director), she grew a lot in her faith and wanted to demonstrate that to others. She remarked on the event, “I had a lot of friends and family there. The really cool part about it was there were other people swimming, just other families. During the break time, they called break and Josh was like, “Okay, let’s get in.” The kids were sitting on the side of the pool – kids that I had no idea who they were – and they had their feet in and everybody was just watching. It was probably the coolest thing that I have done to plant the seed in people spiritually.”

She said how when she came to WCRC, she was at a place of doubt in her faith, but that seeing the faith of others and being in the Christian environment, encouraged her to pursue her faith again. In her words, “just working in the kitchen it really started a fire in me again and it was kind of building and building. Then I started working for camp and seeing God working in the lives of the kids that we were teaching and [were] with every day and just seeing the joy on the kid’s faces as they are here…. It was like an overwhelming you need to seek this out again and you need to come back to me. I’ve never had that experience in my life before. It really felt like the Holy Spirit was moving through me. I know growing up people say that all the time, but when you’re a kid you’re like, “What does that mean?” It was insane.”
​
She ended with, “Camp does a lot for the kids, but it also does a lot for the people that work in it, which I did not know. I was also one of those people growing up that felt like I didn’t read my Bible and I didn’t do devotions and I didn’t pray that much. I felt like I wasn’t a good Christian because I didn’t do any of that and I didn’t go to church that often. Josh [told me,] “Well that doesn’t really make you a Christian.” And that was the first time someone said that to me and it just changed my whole perspective.”
Thank you for reading Kai’s story. We are always encouraged that WCRC is a place that provides an opportunity for God to not only work in the lives of our guests, but our staff as well.