Posted on February 24, 2016January 26, 2021 by WCRC
This is our monthly camper newsletter from February. Click here to subscribe.

“Listen! A farmer went out to sow his seed. As he was scattering the seed, some fell along the path, and the birds came and ate it up. Some fell on rocky places, where it did not have much soil. It sprang up quickly, because the soil was shallow. But when the sun came up, the plants were scorched, and they withered because they had no root. Other seed fell among thorns, which grew up and choked the plants, so that they did not bear grain. Still other seed fell on good soil. It came up, grew and produced a crop, some multiplying thirty, some sixty, some a hundred times.” Mark 4:3-8

​This parable describes 4 responses to hearing the Gospel. It’s probably a familiar story to many of you, but it’s always worth revisiting. Today we’ll look at the first response and continue in this parable over the next few months.

First Response: Don’t get it

Choose a friend or family member who has not accepted the Gospel as truth and start praying for them regularly, every day or every week. ​ 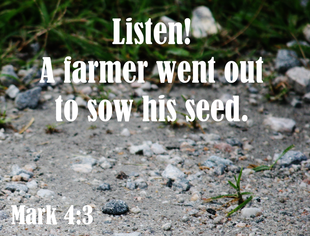