Posted on March 30, 2016January 26, 2021 by WCRC
This is our monthly camper newsletter from May. Click here to subscribe.

“Listen! A farmer went out to sow his seed. As he was scattering the seed, some fell along the path, and the birds came and ate it up. Some fell on rocky places, where it did not have much soil. It sprang up quickly, because the soil was shallow. But when the sun came up, the plants were scorched, and they withered because they had no root. Other seed fell among thorns, which grew up and choked the plants, so that they did not bear grain. Still other seed fell on good soil. It came up, grew and produced a crop, some multiplying thirty, some sixty, some a hundred times.” Mark 4:3-8
​
Today we’re going to finish up Mark 4 by looking at the fourth response. You can find the last 3 month’s newsletters here discussing the first, second and third responses.

Fourth Response: Those who live the gospel as a part of who they are

Hopefully reviewing this parable over the last several months has helped you examine your own life and see where you are personally. Don’t be content to stay where you are. Always seek a deeper relationship with the Lord and seek to help those around you deepen their faith. 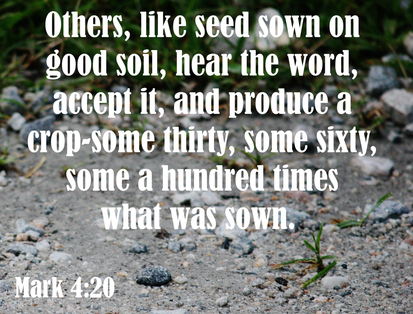